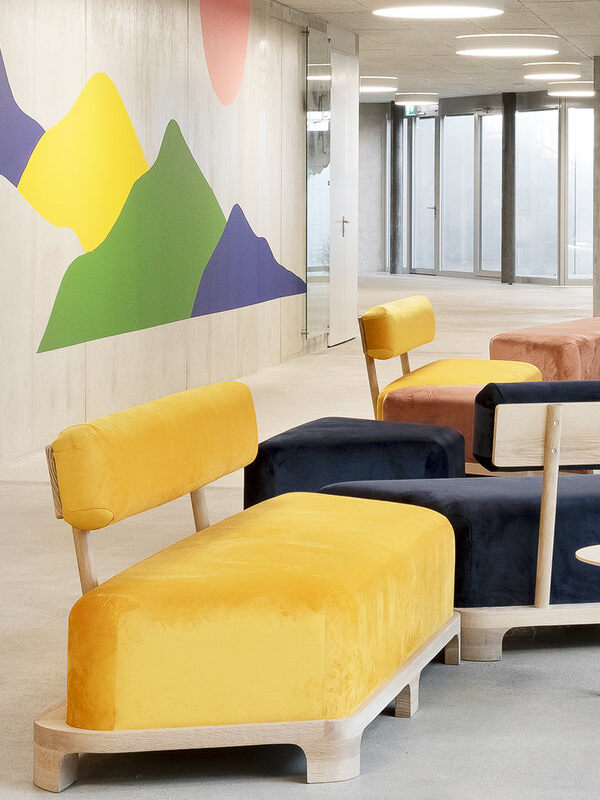 On the initiative of the Alumni Association and their president at the time, Jean-Aimé Baumann, Cité Universitaire de Genève was built to make up for the lack of student accommodation and to offer students the experience of communal living in an environment that helps them to succeed in their studies. The project received financial support from both private and public investors. Since it opened on 24 November 1963, Cité Universitaire has continued to fulfil its role in providing accommodation to students. Today, we welcome over 850 students from all over the world, representing 95 different nationalities.

Located in Champel, Cité Universitaire currently has four buildings. Buildings A and B were built first, in 1963, and contain single rooms and studios. Building C was built in 1986 and is made up of apartments that hold up to four people. Finally, building D was completed in 2013 and offers rooms in shared apartments, studios and private apartments.

The complex has many different facilities that make residents feel at home, encourage them to mix with one another and connect Cité to the outside world. As well as a spacious garden, there is also a café and a pizzeria, a theatre (Cité Bleue), card-operated laundry facilities, a convenience store, sports facilities managed by the University’s sports department (multisports hall, tennis courts and a weights room), a dark room and a function room (Arcade 46).

The owner and manager of Cité Universitaire is the Fondation de la Cité Universitaire de Genève, which was founded on 1 July 1954 and is an institution under Swiss private law. It is a non-profit organisation and its objectives are mentioned in articles 3 and 5 of its articles of association:

The purpose of the Foundation is to :

The Foundation is a non-profit organisation.

The Foundation's funds shall be used to acquire, build and manage properties in order to achieve the Foundation’s goals.

The Foundation’s governing body is the Foundation Board, which is organised as follows (Art. 7 of the articles of association):

a) the Rector of the University, who is an ex-officio member;

b) six members freely appointed by the State Council;

c) two members appointed by the Executive Council of the City of Geneva;

d) two members appointed by the State Council on the Rector’s recommendation;

e) a representative for the Cité Universitaire residents appointed by the Foundation Board;

f) a student appointed by the University Assembly.

At least eight of the thirteen board members must have a university degree or a qualification that is deemed equivalent. The Foundation has a three-year contract (2020–2023) with the State of Geneva’s “Département du territoire” and receives financial compensation for its work. The Foundation was given the plot of land and the surface rights to build Cité Universitaire by the State of Geneva.

Below you will find two documents about how Cité Universitaire has changed over time.

Cité Universitaire was founded on the initiative of the Alumni Association and their president at the time, Jean-Aimé Baumann, who wanted to fulfil a wish of the General Students Association. The project received financial support from both private and public investors, and Cité Universitaire opened in November 1963.

Buildings A and B were built by architects E. Martin and L. Payot according to the founders’ designs, and building C was built by Ed. ZurKich. Building A is a 14-storey building with around 200 single rooms for students. Building B has seven floors and offers 32 studios for couples, some bedrooms for children and over 120 single rooms for students. Building C offers apartments with three, four or five rooms and can accommodate up to 130 people, including around ten children. Finally, building D, which was built in 2013, has 246 rooms in shared apartments, 15 studios and 4 family-sized apartments.

Cité Universitaire has several common areas for recreational and cultural activities. The buildings are connected by a self-service restaurant and communal spaces. The complex also houses the Cité Bleue Theatre (formerly the Simon Patiño hall). It can hold up to 330 people, and it has a 300m² exhibition hall. Cité Universitaire is built on a 2-hectare plot of land that belongs to the State of Geneva, which granted Cité Universitaire surface rights to the plot for 99 years. 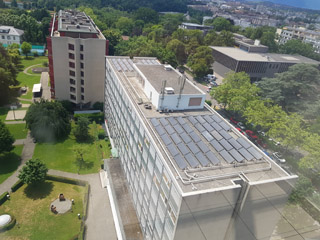 As part of our commitment to sustainable development, we installed a solar-powered water-preheating system in buildings A and B in spring 2001.

By limiting air pollution, we have significantly reduced our consumption of non-renewable energy (gas heating). 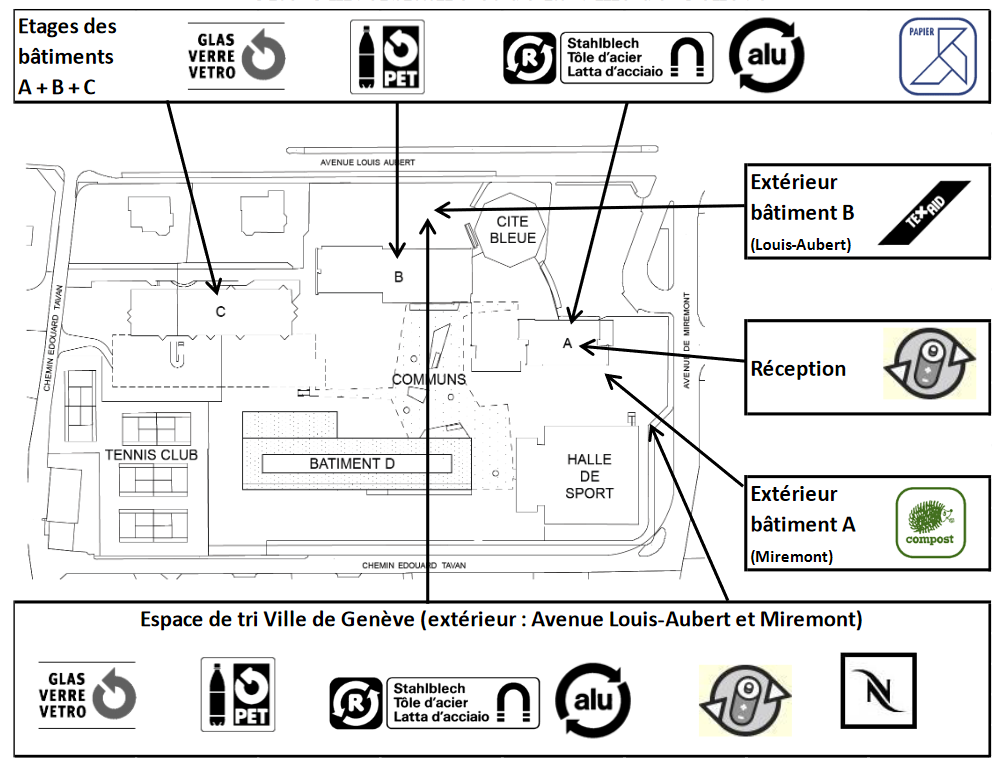 Map of the collection points (in French)

Thermal insulation of buildings A and B: 2010

utumn 2010 and winter 2010–2011: the stairwell in building A was completely renovated, and the single glazing was replaced with double glazing, which provides better insulation for the building as a whole. 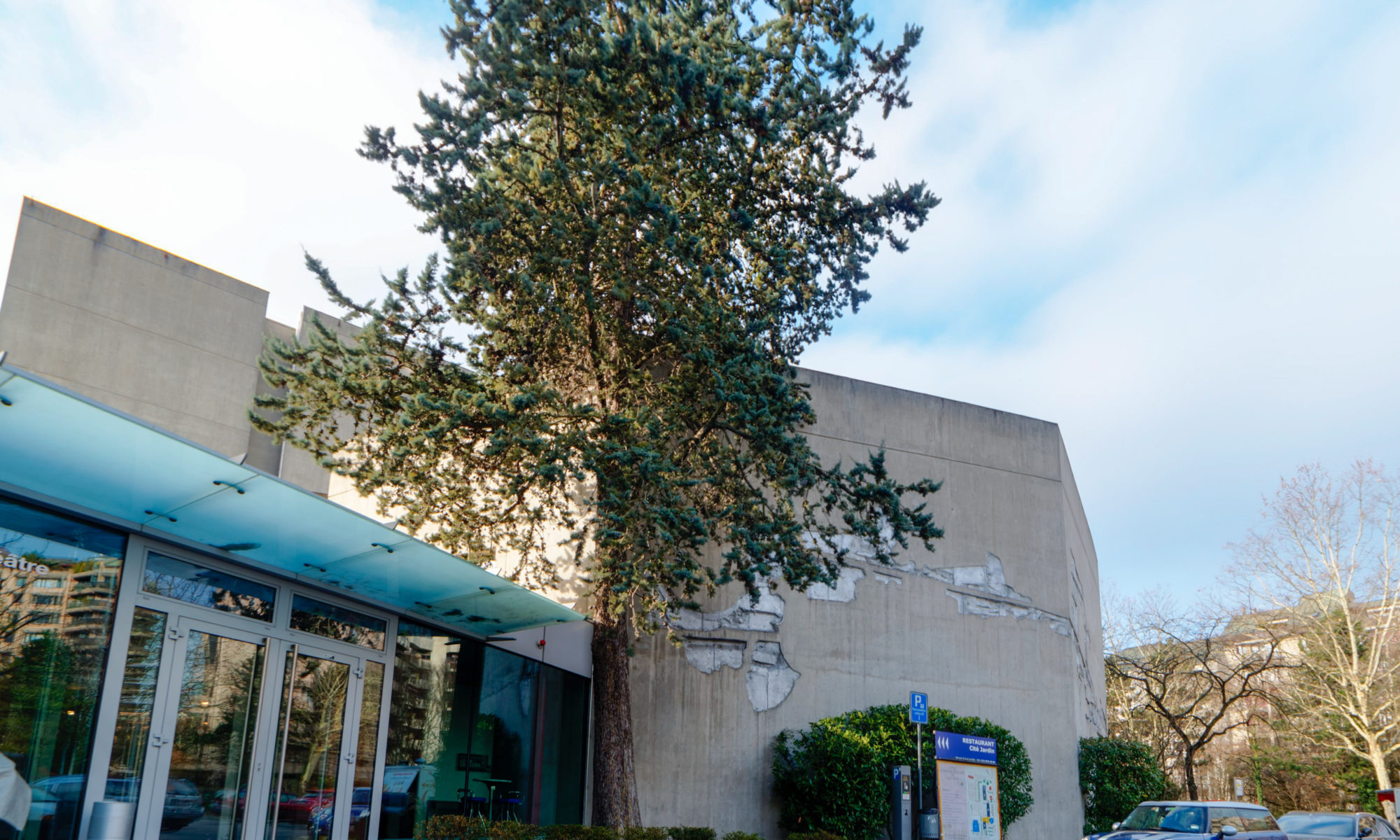 Cité Universitaire is home to the Cité Bleue Theatre, which puts on a range of productions throughout the year. As a resident, you will receive a 50% discount if you show your ticket at reception.
The space can be rented for shows, conferences and film screenings.

From summer 2021, the Cité Bleue Theatre will be undergoing renovation work for around 18 months.

23.09.2011 : deadline for the submission of offers from general contracting companies

07.12.2011 : public meeting between FRAR and Implenia at Cité Bleue Theatre